Cities and towns tend to preserve their fine homes and significant buildings, but the residences, businesses, and other structures frequented by ordinary people—even though much more common—are less apt to survive. Fortunately, and largely through the efforts of the James City Historical Society, the greater New Bern area has a well-preserved example of mid-nineteenth century slave housing. This structure, known as the Crockett-Miller Slave Quarters, is now located at the southeast end of Howell Road on property owned by the Coastal Carolina Regional Airport. This building began its existence within the environs of New Bern. Until about thirty-five years ago, a large farm was located just west of the intersection of Dr. Martin Luther King, Jr., Boulevard and Neuse Boulevard in the general area where a Taco Bell, several other businesses, and the Craven Regional Hospital now stand.

The use of the family name “Crockett” in association with the farm is based solely on local oral tradition. J.S. Miller is believed to have acquired the property in the 1930s, and he lived there until his death in 1954. His widow continued to occupy the Crockett-Miller House until shortly before her death in 1979. In addition to the main house and outbuildings such as a barn and smokehouse, the property included a slave quarters believed to have been built in the 18501860 era, now known as the Crockett-Miller Slave Quarters. The original site of these structures is presently occupied by the Taco Bell fast food restaurant, but it can still be recognized by its slight elevation and by the several old pecan, pine, and dogwood trees ringing the restaurant parking lot. Following Mrs. Miller’s death, the property was sold and the various structures on the site were donated to the New Bern Preservation Foundation. In 1980 the slave quarters building was moved to the rear of 311 Johnson Street, while the other structures were moved elsewhere in New Bern.

In 1993 the Johnson Street property was put up for sale. Dr. Al Howard, the owner of the property, was approached by the Tryon Palace Commission and asked to donate the slave quarters to Tryon Palace Historic Sites and Gardens. Dr. Howard readily agreed. At the time, the staff of Tryon Palace Historic Sites and Gardens felt the quarters would be a valuable asset in improving their interpretation and preservation of African-American history in New Bern. It eventually became apparent, however, that problems involved in moving and placing the structure on Tryon Palace property would make its acquisition by Tryon Palace unfeasible. At the suggestion of the Tryon Palace staff, the James City Historical Society approached Dr. Howard, who agreed to donate the structure to that organization, which he did on October 4, 1993. 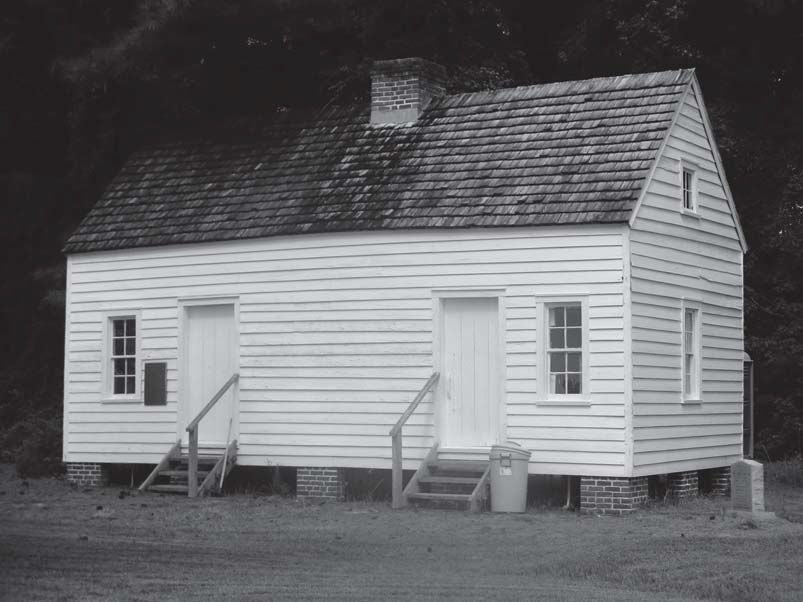 Moving the Crockett-Miller Slave Quarters to the airport site and restoring it was a complicated and expensive undertaking! Many agencies and foundations contributed to the reconstruction project, the cost which was approximately $195,000. The entire process was overseen by the architectural firm Steven & Francis, which insured that proper materials were used and that as much of the original structure as possible was preserved. The restoration was completed in 2003, and the opening took place in July that year with the assistance of airport director John H. Price and his staff. The reconstruction of the Crockett-Miller Slave Quarters has been based on current knowledge of construction materials and techniques used for slave quarters and other lower class housing and service buildings in eastern North Carolina in the 1850-1860 era. Some characteristics it shares with such structures are materials of poorer quality than would have been used for buildings considered more permanent or important, a mixture of hand-hewn and circular-sawn, mill-produced lumber, and a generally light frame created by widely-spaced joints, studs, and rafters in order to save on materials. Additionally, the Crockett-Miller quarters appeared to have little or no interior finishing, typical of the period for slave housing. The building is approximately 29 ½ feet long, 14 ½ feet wide, and 17 ½ feet in height.

Until moved in 1980, the slave quarters had a brick chimney centrally placed between the two first floor rooms, with a separate fireplace serving each room. The loft rooms were unheated, the chimney stack having no fireplace at that level. Access to the loft or attic rooms is by an open, single-run ladder-like set of steps. As originally constructed, the building contained separate quarters for two families, with two separate entrances. The two first-floor rooms were divided by the chimney and flanking vertical-board partition walls. The loft or attic rooms were likewise divided by the chimney stack and similar flanking vertical board partitions. The first-floor rooms contained no ceilings other than the exposed loft floor joints and the underside of the loft flooring, both of which were whitewashed like the exposed walls. Each loft unit had one small window in its gable for light and ventilation. Thus, in its original embodiment as a slave quarters, each unit consisted of a first-floor room which served as the primary working, cooking, and sleeping area for the inhabitants, while the loft room provided additional sleeping and storage space, albeit unheated. A related aspect of the reconstruction project was the erection of a large monument to commemorate all the former slaves buried at the Far Cemetery. In December 2003, this monument was placed overlooking the site, with an inscription:

Perhaps in this neglected spot is laid some heart once pregnant with celestial fire; Hands that the rod of empire might have swayed, Or waked to ecstasy the living lyre.

The James City Historical Society conducts tours of the museum park, which includes the completely restored and reconstructed Crockett-Miller Slave Quarters. One side of the building currently houses old tools, while the other side displays photos and historical artifacts. The museum park also includes the monument commemorating all of the former slaves buried at the Far Cemetery and a functional outhouse complete with a box of corn shucks for personal needs. (A more modern structure is also provided.) Artifacts from the archeological study conducted at the cemetery site by East Carolina University are also located in the park. Tours are free and require about an hour to complete.