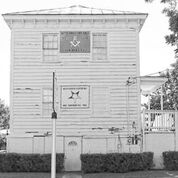 It is well known that New Bern lays claim to many “firsts,” and among these is the establishment of the first Masonic lodge for African-Americans in North Carolina, in 1865. Although its name suggests it was the first King Solomon Lodge, this is not so. Many white Masonic lodges and African -American lodges had been given the name King Solomon Lodge, and New Bern’s was originally listed as No. 23. It is unclear exactly when the numbering was changed, but records show that King Solomon Lodge No. 1 in New Bern was referred to in the Public Laws of the State of North-Carolina, passed by the General Assembly, Vol. 2, 1870.

From the beginning, King Solomon Lodge in New Bern was a center of controversy among white Masons in the South. In her seminal work on African-American history in New Bern, Crafting Lives, author Catherine W. Bishir describes the following account:

On 27 November 1865, the New Bern Daily Times ran a story on Negro Masonry, which was taken from a recent issue of the Anglo-African. “Past Most Worshipful Paul Drayton, of the National Grand Lodge, is about to resume his labors in the South, under the authority of the Most Worshipful Grand Lodge of the State of New York. He will leave this city in a few days to dedicate and constitute ‘Union Lodge’ in the city of Charleston, S.C., and a King Solomon Lodge in the town of New Bern, N.C., and is also vested with full power to organize lodges throughout the southern portion of this country.”

In the Daily Times article, the writer “demanded that North Carolina’s Grand Lodge take a stand against the formation of the black lodge.” As a result, leaders of the state lodge registered a complaint with the white Grand Lodge of New York, and “a heated exchange ensued before the white Carolinians realized that contrary to the report, the New York Grand Lodge had played no role in establishing the New Bern lodge.”

The article creating the controversy brought home the lesson that “whatever benefits the war and emancipation had brought or promised for black citizens, a rising tide of white opposition countered their efforts to claim full participation in community life.” Bishir goes on to say, “They saw all the more clearly the importance of establishing Masonic Lodges and other voluntary associations to complement their church homes as they addressed the new challenges of life as free people…. For both blacks and whites, Masonry played a vital role in asserting their manhood, supporting their leadership in economic and civic life, and promoting virtuous living.”

Paul Drayton was associated with the National Compact Grand Lodge, and he met with James Walker Hood, an ordained deacon in the AME Zion church who was preaching at Andrew’s Chapel in New Bern at the time. Hood was at that time associated with the Prince Hall Lodge of New York and is considered a principal founder of the King Solomon Lodge in New Bern. Hood served as the first Worshipful Master of King Solomon Lodge, the first Grand Master of the State of North Carolina, and later became the seventeenth Bishop in the AME Zion church. Hood also founded Livingstone College in North Carolina and was instrumental in founding many black churches throughout the south.

The early leaders and members of King Solomon Lodge in New Bern were also active community leaders and businessmen. Author Bishir discusses a number of these leaders in her book. George B. Willis, formerly enslaved, is considered a principal founder of King Solomon Lodge in New Bern and was one of New Bern’s first black aldermen in 1869. Another founder, Henry H. Simmons, was a freedman and worked as a cooper. It was noted in the 1897 obituary of Israel Harris, Sr., that he “was Secretary of King Solomon Lodge for 30 consecutive years, holding the position at the time of his death.” Edward R. Dudley was one of New Bern’s wealthiest black citizens: a city marshal, a trial justice, and, in addition to serving in the state legislature, “one of Craven’s three black legislators.” A past master of King Solomon Lodge was Allen G. Odeon, a shoemaker and former sergeant in the Thirty-sixth U.S. Colored Troops. Another early member was Edward Havens, a Mason for more than fifty years whose family ran a successful shoemaking business in New Bern from the 1860s to the 1940s. By 1880 there were two more black Masonic lodges in New Bern, the Morning Star and Zaradatha.

As to the lodge building’s origins, author Bishir noted that “In 1870--as witnessed by a notary in Cleveland, Ohio-Richard G. Hazel, a former blacksmith from New Bern, and Ann N. Hazel of Cleveland sold lot #1 on Queen Street in Dryboro to the trustees of King Solomon Lodge #23 of Free Masons in the city of New Bern.” The members of King Solomon Lodge did not have their own building until later that year, when a structure was erected on Queen Street.

While the building survived the great fire of 1922, it was moved to Metcalf Street to make room for the expansion of Cedar Grove Cemetery. That section of Metcalf was later renamed Howard Street, where the building remains today. The building survived two more fires over the ensuing years. A state historical marker placed nearby states: “KING SOLOMON LODGE -- First African American Masonic lodge in N.C.; est. 1865. Erected in 1870, the building was moved here in 1920s.” The building is also listed on the National Register of Historic Places for North Carolina.

Peter B. Sandbeck, in his Historic Architecture of New Bern and Craven County (Tryon Palace Commission, 1988), describes the lodge as follows:

Among the notable surviving Italianate exterior details are the bracketed cornice, low hipped roof, and diminutive cupola. Recent alterations have obscured its original corner pilasters and an unusual arched panel, probably originally a lodge sign, located on the facade at the second floor level. The window openings retain many of the original six-over-six sash. The present high basement dates from the 1920s move. On the interior, the King Solomon Lodge follows a side-hall plan, with one principal room per floor. The stair exhibits square newels and a rounded handrail supported by rectangular-in-section pickets. At the second floor level is the large, simply-finished lodge room painted the traditional sky-blue color. The highly traditional nature of the interior finishes suggests that they are the product of some of the city’s numerous black artisans, probably lodge members, who had worked in the building trades prior to the Civil War.

According to Ronnie Lovick, Past Master of King Solomon Lodge, a written history of the New Bern lodge does not exist. Many of the records of the lodge are not available to the public, and it has only been recently that nonmembers have been allowed into the building. An exception was granted by the Grand Lodge in Raleigh to allow King Solomon Lodge to participate in the New Bern Historical Society’s Ghostwalk event in October 2016. “Ghosts” for that evening were Mr. Pasteur, Past Worshipful Master, and Frank Evans, Sr., a Prince Hall Most Worshipful Past Grand Master who has served as a Craven County commissioner. Other political leaders who have been members of King Solomon Lodge include James O’Hara, legislator and congressman; Henry P. Cheatham, congressman; and George H. White, legislator and congressman.

The lodge continues its active ties to the New Bern community today. Its members hold an annual Founder’s Day banquet and parade and sponsor a city street cleanup; additionally it has established a Martin Luther King, Jr. Scholarship Award to be given to a local high school student. It holds a Thanksgiving and Christmas food drive for the needy and is active in sponsoring the Gleaners, a girls group, and the Herbert B. Shaw Knights of Pythagoras, a boys group, with the aim of getting young people involved in activities within their community and in being good citizens

Charlotte Rhone and The Rhone Sisters

Many ask about this event and how it impacted New Bern's residents and businesses. A quarter of the population was left homeless, hundreds of jobs were lost and a forty block area was totally destroy